Who are all of our volunteers? And what makes them join us? Volunteers from last Actionday gives you an insight!

Today there were around 12 volunteers helping to collect litter in Vondelpark and they were provided with litter pickers plus large bags to collect the litter in. No rain was expected but the park was very muddy (away from the main pathways) due to recent rainfall – nevertheless, it was a pleasant day to be in the park. 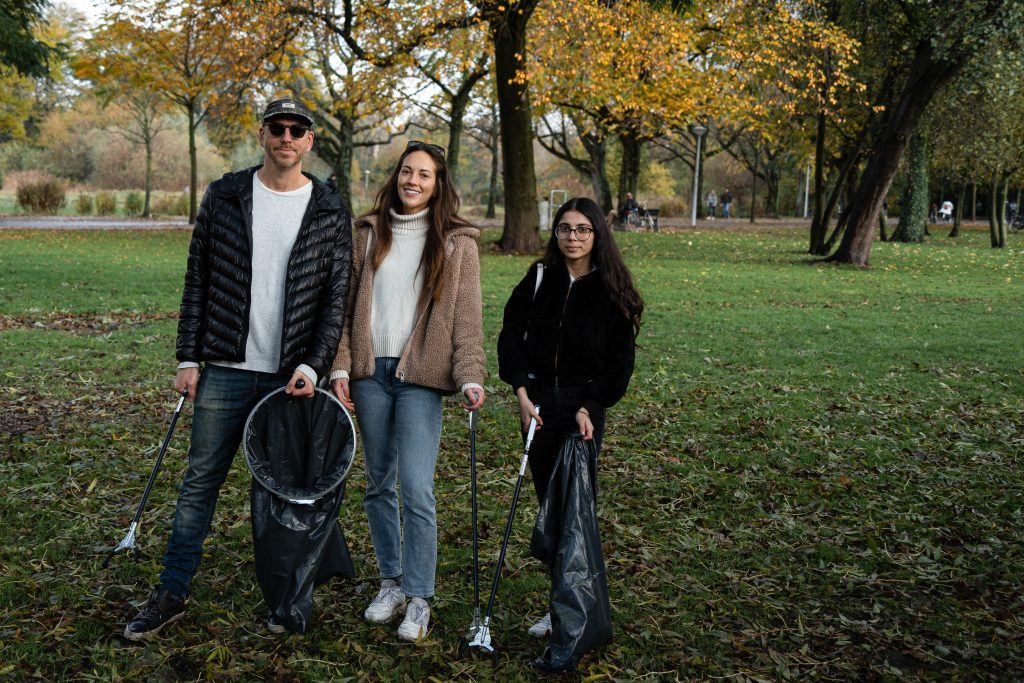 Andrea found a shoe on the way! Photo by Alice R. Alfonsi

Andrea was volunteering for the second time having previously worked on a project at the City Farm. He enjoys volunteering and has previously done it in Italy and London and says he “always likes to serve the community”.

Marissa and Harald joined the project as a couple – for the first time. Marissa has previously volunteered at home in in Texas and feels that Serve The City caters well for expats and that the site is really easy to use. Her boyfriend Harald was surprised by some of the items they had found in the park such as a whole workout outfit and some weights and other workout equipment that had been left on the grass in a trash bag!

Roji was volunteering for the first time although her sister has done it in the past. She is keen to see Amsterdam remain a clean city so wanted to play a role in keeping it clean. Another volunteer, Marina, came from the organization International Studies Abroad with two students from the US – Daniel and Ally. This was in support of their ‘Community Service Day which takes place close to the US Thanksgiving Day.

A couple passing by stopped to ask questions as to who the volunteers were and how they came to be collecting litter in the park – and they described the volunteers as ‘heroes.’

Starting at 11:00 in Westerpark, a group of volunteers started to make and share pancakes via a ‘bakfiets’ bike in Westerpark. Using two mini gas stoves, one person was able to make pancakes whilst the other volunteers asked the passers-by if they would like a free pancake and which topping they would prefer. The volunteers took it in turn to make pancakes. This monthly project is a collaboration with Pancake Adventures, who aims to be an ‘ambassador of joy’ – and Frank from Pancake Adventures was helping with the project today. 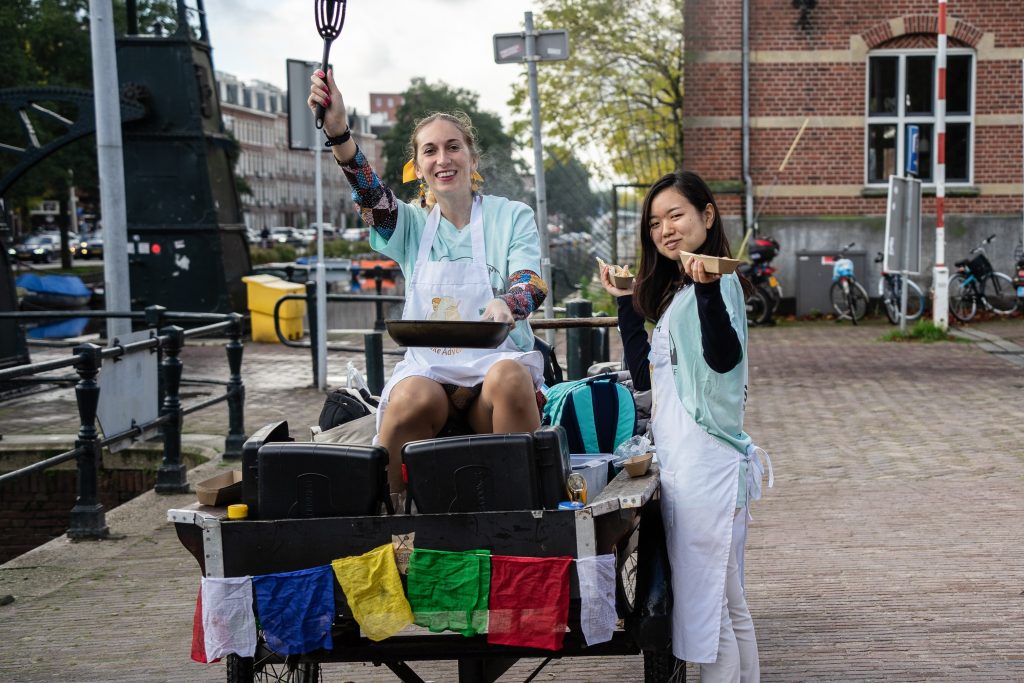 Karen and Andrea are ready to hand out pancakes! Photo by Alice R. Alfonsi

A woman on the street was happy when Maarten the volunteer gave her a pancake – for free! Photo by Alice R. Alfonsi

There were many happy faces when people received a free pancake but some people were intrigued and surprised when they first heard that the pancakes were free – so there was a real mix of comments ranging from “echt?!” – to “super-lekker!”

Karen is from Japan and has only been in Amsterdam for 2 months. Her teacher suggested that she join the Action Day and she enjoyed the fact that “people are happy with the pancake but also with our purpose!”

Ronald was supporting the Actionday as a first-time volunteer. He had previously searched for volunteering opportunities but then listened to a podcast that featured Pancake Adventures and he then found out more about STC Action Day and was keen to get involved.

“I think it’s a way to bring kindness to the city,” he said.

Maarten and Andrea volunteered as a couple. Andrea is from Spain and Maarten is Dutch. Andrea said that Maarten is a ‘pancake enthusiast’; it was not his first time volunteering for STC. Andrea was interested in joining the project to support ‘World Kindness Day’ and because she has a keen interest in wellbeing due to her profession.

Who are all of our volunteers? And what makes them join us? Volunteers from last Actionday gives you an insight!2021-11-152021-11-15//cdn.servethecity.net/wp-content/uploads/sites/15/2017/11/stc-logo-amsterdam.pngServe the City Amsterdamhttps://cdn.servethecity.net/wp-content/uploads/sites/15/2021/11/marina_volunteer_vondelpark-scaled.jpg200px200px
Recent news
Newsletter
Get in touch!
Follow Us
Like us on Facebook

If this move causes stress for the social worker, think about the citizen who is in the situation himself…News 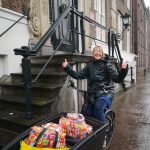 Help us get an electric bakfiets!News