A tale of pepernoten and a Sinterklaas gift

It was the Saturday of the 16th of November – a grey, cold day in Amsterdam that could be no special than any other grey, cold day, only that 3 days before, Sinterklaas had arrived at the city and the excitement of all children of the Netherlands filled in the chilly air with warmth and brightness. This long-awaited man had come to the city all the way from Spain, sailing down the Amstel River on a boat, had hopped on his white horse Amerigo and, since that day, had been crossing the magically lit bridges of Amsterdam, accompanied by a band of jolly helpers – the Pieten. He had carried a big bag on his back, a bag full of gifts and sweets, which was the reason why all the children stayed up at night expecting to hear his steps on the roof. Have they been good throughout the year? The children knew they couldn’t lie to Sinterklaas, as he listened to them through the chimneys before rendering a judgement. He would know the truth. If they had been good, he would open his bag and leave a gift in the children’s shoes, if not – he would slip a piece of coal inside.

Baking pepernoten with moms & kids at the shelter
While Sinterklaas was visiting Amsterdam, a group of volunteers from Serve the City and I approached a shelter of homeless women and children in Amsterdam North. I asked myself: “Have the kids living there been good or bad?” The building contained 20 apartments, so how could Sinterklaas have time to listen to all of them through the chimney? I looked around the building but could see no traces of his steps on the walls of the building, which worried me, because I was sure that none of the children living there was so bad to be left without sweets. We entered the building, with a bag full of groceries on our backs, and started preparing lunch for them. The kitchen, which was shared between all the mothers with their children, slowly started to fill. As I observed the kids playing and helping the volunteers with preparing pepernoten, the typical Sinterklaas sweets, I was glad that our group was there, just in case Sinterklaas would be too busy to visit them. Then I thought: “Even if Sinterklaas won’t find time for them this year, Fanny always will.”

Helping out at the shelter – to encourage independency
Fanny Coupain was the social worker taking care of the mothers and the children at the shelter. She agreed to talk to me, and as I was taking notes of our talk, she explained to me that the young mothers living in the shelter were there so they could learn to live on their own, manage their own finance and daily tasks.

It warms my heart if I can help someone, I want to share my big heart with someone. I get really happy if I can help.

The end goal was that they started living independently, in their own apartments. She added that “this was very rewarding work” and, since she was a mother herself, she found working with the children “just wonderful.” When I asked Fanny, what inspired her to do her work, she responded: “I have a very big heart. I have been a social worker since 2012. It warms my heart if I can help someone, I want to share my big heart with someone. I get really happy if I can help. A lot of young women and children need help.”

Exchanging stories, hearts and volunteering experiences
After talking to Fanny, I went back to the kitchen, which was now filled with the spicy scent of baked sweets, and talked to the other volunteers. I asked Christina, a first-time volunteer at Serve the City, what her motivation for volunteering was. “I really like volunteering in general” – she said – “you meet like-minded people and connect and socialize.” Previously, she had volunteered in Nepal, teaching English to women who suffered abuse and helping children with their homework. Like Fanny, she found working with the kids very rewarding because she had built a very tight bond with them.

Finally, Elena told me that volunteering made her life richer and that she felt a rewarding feeling after volunteering

Hamdi’s motivation to volunteer was similar to that of Christina’s: “It’s a chance to network, practice your hobby and doing something beneficial for your personal development, career and contacts”. Hamdi had worked as a volunteer photographer – and even though this was his role that afternoon, he soon proved himself as an excellent baker, too. Hamdi’s advice to all expats in Amsterdam would be to do volunteering as a way to integrate and do good things for society. Finally, Elena told me that volunteering made her life richer and that she felt a rewarding feeling after volunteering. She said: “It is nice to meet new people and to see how other people can help. As she had an office job, she also found it nice to do something with her hands.

Ending the day together: chilly outside, warm inside
I closed the book with my notes and helped the volunteers and the children finish preparing the last tray of sweets. It had been a long afternoon full of painting and baking and it was time to go. As we said goodbye and went outside, shivering at the chilly air, I was glad that the shelter existed to keep the children warm. I wondered if they were lying awake in their beds at night, waiting for Sinterklaas’s presents?

Even if it would slip from the old man’s mind to leave a toy at the children’s shoes, they had already received a gift – the care and love of people like Fanny and our group of volunteers.

I was still a little preoccupied that Sinterklaas might forget them. And then it occurred to me that even if it would slip from the old man’s mind to leave a toy at the children’s shoes, they had already received a gift – the care and love of people like Fanny and our group of volunteers. As we walked back to the comfort of our own homes, I hoped that, what we did today, made the grey, cold Saturday of the 16th of November brighter and warmer for the kids at that shelter too. 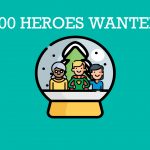 Vote for Serve the City at “Help Nederland vooruit”, and help us win €10,000!News