Pancakes for the homeless!

“It’s nice to help people. It’s good for you!,” Oleksii

Pancakes are a hearty and classic Dutch meal. Volunteers with Serve the City recently got together to prepare a nourishing pancake meal for the men and woman who come to the Inloophuis Oud West in Amsterdam.

On a cold Saturday they were able to serve lunch to 90 members of the community. There was something for everyone. Sweet pancakes were available, savory bacon and cheese, and even plain. Pancakes were washed down with plenty of good strong coffee and hot tea.

Places like Inloophuis Oud West serve as more than just a place for the homeless to come get a meal. They are the mock living rooms where these men and woman share stories and give each other vital tips and ideas about living on the streets. According to the manager of the center, there is a growing need in Amsterdam for centers like his. “The thing is, with these places, if they disappear, no one wants them in their neighborhood,” he said. But the increase in immigration has resulted in more people on the streets in the last few years. Andreea, Ivan and Oleksii all work for the same company. “It is an initiative from our company. They would like you to enter a charitable cause,” said Ivan. He added, “When I heard about this, I knew I could do something to help.”

The trio mixed box after box of pancake mix and fried them up with good cheer. “It’s nice to help people. It’s good for you.” said Oleksii.

Judging by how eagerly the recipients of the meal gobbled up the pancakes was had by all. 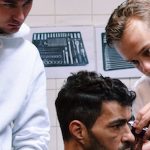