“It’s the smile they walk away with. That’s the biggest thing that happens here,” Demio

For the homeless something as simple as a haircut is a luxury that is often out of reach. Three Amsterdam barbers decided to change that by volunteering their time with Serve the City and spend a cold, wet Saturday afternoon giving haircuts and humanity to the men they styled.

A drafty bicycle repair shop in back of Inloophuis Oud West served as the barber shop for the day. It was hung with rusty bike parts and spare tires. Two mismatched mirrors were propped up on toolboxes. As the barbers quietly worked the front of the shop a man tinkered with a bicycle in the back.

Douglas, a 24-year-old barber, originally from New York, looks older than his years. He has tattoos and scars that tell a story of strength. Douglas knows all too well how it feels to be homeless and how small gestures go a long way towards helping a man reclaim his dignity. “I was homeless twice,” said Douglas. By 14 years old he had taught himself the art of hair cutting and was working in a barbershop and off the streets.

“Back in New York City I used to volunteer a lot with homeless people,” explains Douglass. He also voluntarily cut hair and distributed food back in America. He has been living in The Netherlands for nearly a year and a half. In December he suffered a near fatal metro accident that had him rehabilitating at home until recently. He’s now working again and more determined than ever to give back to the community. “You just got to show love to everybody. That’s what I learned. That’s why I enjoy doing what I do [here],” explained Douglas.

Mohammed, a visitor to the shelter, was getting his hair cut from a volunteer barber. His thick black locks fell at his feet as Demio carefully gave him a fade that would have been costly in any Amsterdam shop. Mohammed said he is able to get his hair cut twice a year because of services like this.

As with most of the homeless, Mohammed is reserved and quiet, as though reluctant to draw attention to himself. It’s hard not to notice he appears transformed by the haircut. His appearance is not only neat and clean, but he walks with a bit more confidence.

Demio, the young barber who has transformed Mohammed’s hair said, “It’s the smile they walk away with. That’s the biggest thing that happens here.”

Demio had sought out an organization to volunteer with. When he found Serve the City and the Hairdresser for the Homeless program, he knew it would be perfect and encouraged the others to join him.   All agreed they would enjoy coming back.

“I know when I get a haircut, I feel ten times cleaner and ten times fresher. It’s the same for these guys,” said Mitchell, as he watched Demio put the finishing touches on a haircut. The pair normally work in a high-end barber shop. Coming here not only helps the men at the shelter but it allows someone like Demio (the youngest of the barbers at 19 years old) to get practical experience and to cut different types of hair that they might get in their shop. With the ongoing training and volunteering “everyone benefits,” said Mitchell. 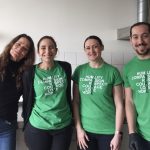 Burgers and Bingo for ex-homelessNews 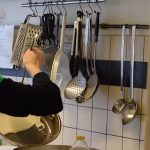